Jamaican dancehall artist Red Rat, also referred to as Double R, was in the Netherlands and we got a chance to hold a vibe with him!

Red Rat on dancehall music, Marvin the Beast and Sting 2016

Red Rat, real name Wallace Wilson, was booked at the Hot Sunday Nights – Dancehall night at Club Mondial so we traveled to the south of the Netherlands to interview him and get some exclusive shots of him performing. He spoke candidly about the difference between 90’s dancehall and dancehall in 2016. Red Rat also gave his opinion on the dancer Marvin the Beast from Montego Bay, reminding us that women themselves are choosing him as a dancing partner. We spoke about going towards Sting 2016 and the Mavado / Popcaan / Demarco feud. It was amazing to see that Double R put into words the feelings many of us have about the current state of dancehall music.

Check out the Red Rat interview and drop a comment:

We met up with the always charming king of dancehall, Beenie Man, in Amsterdam during his European Tour. We spoke about his album Unstoppable, a possible feud with Mavado and his love life. Including exclusive shots of his performance in Amsterdam.

Dancehall Explorer met up with dancehall artist Aidonia in Amsterdam during his 2016 European Tour.

In this in depth interview Aidonia speaks on the loss of his friend Lamar Dookie (Peak State), performing in Europe and his love for dancehall music. We have also included shots of his outstanding performance at Jamrock XL in Amsterdam where Aidonia invited JOP’s rising star Govana (formerly known as Deablo) on stage with him.

Check it out and let us know what you think:

Dancehall artist Konshens, real name Garfield Spence, was in Amsterdam for a performance at the sold out Jamrock Explosion on 7 November 2015. His high energy show lasted over an hour and was a delight to the fans. Dancehall Explorer met up with the Gyal a Bubble-singer while he was backstage at the last show of his two month European tour by Atlantic Booking.

For quite some time we felt that Konshens’ popularity had been growing rapidly in the Netherlands and this was once again confirmed in early September of this year. At that time the hit song “Policeman” with Dutch singer Eva Simons went double platinum showing that mixing dancehall with other genres can be a huge succes. Another song that has been getting heavy rotation in the clubs is Lethal Bizzle’s “Fester Skank Remix” featuring Konshens. Click below to listen:


Remarkably Konshens told us that even though he feels happy, he does not feel contented for he is always striving to improve and be even greater.

Ambassador of dancehall music and Jamaica 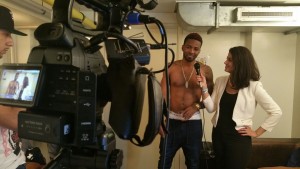 Check out our interview with Konshens here: 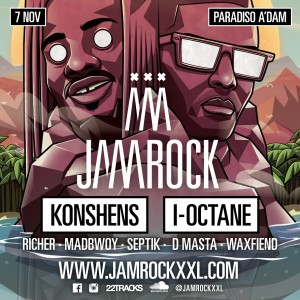 While twin brothers, Paul and Patrick Gaynor, were on their European tour we met up with them in Amsterdam, the Netherlands. They spoke about the state of dancehall music, dancehall artists, the movie Ching Pow and the book The Road To Zion.

Twin of Twins are known for their entertaining mixtapes and have now expanded their portfolio all while spreading a deeper message.

While on their 2015 European tour the dancehall group Red Eye Crew (R.E.C.) from St. Maarten sat down with Dancehall Explorer to talk about their music, SXM girls and what their future plans are.

The four guys all in their mid 20’s gave an energetic performance at Soca vs Dancehall in Rotterdam and brought the Caribbean Dancehall Queen Kalalisha with them.

Check out the interview plus footage of Red Eye Crew’s performance at a sold out edition of Soca vs Dancehall in Club Empire.

All the hype, all the controversy, it all went flying out the window upon hearing Tommy Lee Sparta live. Maybe he did blatantly sing about badness, which is rather ironic in its own respect, it did not matter anymore. He could’ve sung about macaroni and cheese and it would not have mattered, for the only thing that mattered was his incredible voice. END_OF_DOCUMENT_TOKEN_TO_BE_REPLACED

Tiana The Dancehall Duchess at Jamaica New
We met up with Tiana at Rotterdam’s newest dancehall party ‘Jamaica New’. Comparing this show to the dancehall artist’s performance in 2013 a tremendous growth in hyping the audience could not be overlooked.

We remember Tiana’s performance at Soca vs Dancehall in Club Eclipse last year as a good one, but not necessarily a great one for the audience present. The crowd at that time, being mainly soca lovers, reacted lukewarm to her energetic performance and a dancehall lover might say it was just a matter of not catering to the right audience.

Tiana in Waterfront in 2014

Now fast forward to May 31st 2014 and be blown away by a dancehall artiste that has grown. Rocking a short, blond new coupe the Dancehall Duchess showed us she mastered the skill of engaging an audience. A new Tiana delighted, this time a Dancehall audience, with a performance that was energetic and captivating to say the least. Tiana stepped out on stage wearing a red, white and black one piece suit with a black leather jacket and pleased fans with songs like “Pum Pum Phat” END_OF_DOCUMENT_TOKEN_TO_BE_REPLACED