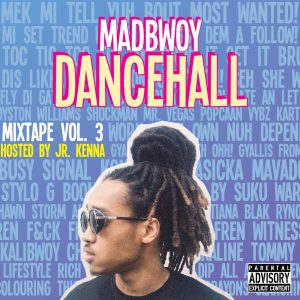 In 2016 dancehall is showing up in places we’d never expect it and at times it’s a hybrid form that is barely recognisable as the sound we grew up on. So you can imagine the joy I feel when discovering a mixtape that is committed to an authentic dancehall theme. As quite a lot of mixtapes were released around the same time I did not immediately listen to this one, however after seeing the amount of  ?,  ? and ? emoji’s accompanying the Madbwoy dancehall mixtape on my social media timelines I got curious.

When I finally got a chance to listen to Madbwoy’s Dancehall Mixtape vol. 3 the first 10 minutes convinced me that this was gonna have me dancing while doing the dishes, it would be blasting while I was getting ready to go clubbing and it would be the background music of many selfie snaps. In the first 10 minutes there is Worl Boss, Gully God, Sparta, Unruly Boss and a fun lyrical play when mixing Vegas’ Identify with Kartel’s Fever. As with any decent work of art it will leave you wondering about the making of, so I called up DJ Madbwoy and asked him a few questions.

Interview with the young and driven DJ Madbwoy

What was the main goal for making this mixtape?
Just like with my other mixtapes I want to make people listen to  dancehall, give them more knowledge on dancehall and update them with what’s new. I also feel like there’s gotta be somebody that is willing to take the time and effort to make a dancehall mixtape in this way. Somebody’s gotta do it, so I did it.

If you compare this mixtape to your first mixtape, what are the differences?
I’ve been practicing with scratching and I hope you can hear improvement in that area. Also I have been working on the mastering of the sound and using a compressor. This increases the listenability because I make sure the volumes of the different songs come closer together.

Why do we hear Junior Kenna, who is hosting the mixtape, only at the start of the mixtape?
I like when a mixtape focuses on the DJ skills.

Matching those Vegas and Kartel lyrics at 08:12 was that a way to distinguish yourself as a DJ who not only looks at BPM but also lyrical content?
[looks surprised and laughs out loud] Noooo, I didn’t even know. Wow, that was unintentional, but it sounds nice though. After I finished the mixtape I also noticed the way that the words “call back” (Hey Addi) and “bike back” (She Like That) at 42:09  rhyme. It wasn’t done on purpose but it sounds harmonious.

I absolutely don’t think anyone should ever have to defend using a champion song like Popcaan’s Junction (2015) on their mixtape, but I am curious as to why you chose it since you mostly selected recent tracks.
I feel that, here in the Netherlands,  Junction has not received the recognition it deserves. This is why I thought listeners should be exposed to it through my mixtape, the song is just that good.