A dancehall party with a mission

A dancehall party in Rotterdam isn’t exactly a novelty, but HOELAHOEP does stand out.
The first party that has such a clear cut concept and a mission to “bring the Jamaican party vibe to Rotterdam with the hottest dancehall tunes and tropical hospitality”. During these cold winter nights the two young ladies who organize this party want to make the temperature rise and have a party with unequivocally good vibes, but did they succeed? 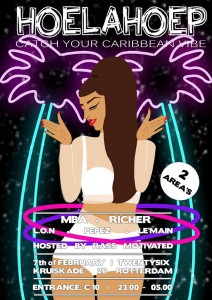 The venue was not too big, but had a major advantage for this party since there were two levels. Upstairs was a mix of reggae, kizomba and other Caribbean music and downstairs was strictly dancehall. When dancehall is all you love, this is music to your ears, no waiting for the DJ to be done catering to the hiphop lovers or the couples that wanna dance all cute to their kizomba, no…straight dancehall tunes downstairs.

The DJ line up combined with MC Rass Motivated ensured the right vibe by going for the real hot tunes without fear of the listeners not knowing every song they played. Where you might find some DJ’s going for ‘safe chocices’ like playing the more mainstream dancehall songs and some classics, this was not the case at HOELAHOEP. Party goers were served everything from Gully Bop to Demarco and even the lesser known Don Diesel on Bad Wine riddim and the crowd loved it. There were actual hula hoops and welcome drinks and snacks which was of course nice, but that really doesn’t make a party great, it was the selection of music that makes dancehall lovers want to come back to this party.

Not a Badman Place

HOELAHOEP is so clear in what the party dictates, there were even Party Rules posted online for this event.
Some of these Party Rules were:

How does that work out in the party? You’d be surprised! The first rule proved essential, for the club was full so fast that after 1:30AM it would be near impossible to get in. The rest of the rules translated into each and every guest dancing. Any kind of Badman pose of just standing up with your drink and looking at the dancing going on, was just out of place. HOELAHOEP is not a badman place.

Pros: Tune pon top a tune all night, strictly happy people in the party
Cons: the place was jam packed so there was not quite enough room for all the bruk out and wine up