Around 1.30am DJ MiXit treated the scant crowd to an assortment of the greatest dancehall hits of 2012, the 2008 back-and-forth Gully and Gaza diss tracks and of course Munga’s biggest tunes. Most patrons, who were mainly Belgians originating from various Caribbean and African countries, were sitting around until the party warmed up.  When the party warmed up there were about 150 people, some waiting to see Munga and some not even knowing  there was going to be a performance that night, but just enjoying the dancehall music. A little after 4am MC Kevz took the mic and started hyping up the crowd, ’cause Munga was in the building!

At exactly 4.24am, with roughly 50 people left in the party, Munga Honorebel stepped out of the smoking room with a glass of Hennessy still in his hand and took the mic. Styling blue jeans, a fitted blue denim shirt and his accessories being a mix of bling on his fingers and a chain of wooden rasta-colored beads he flawlessly represented the Gangsta Ras image. While occasionally sitting down on the pool table Munga sang hits like “Not Bad Like I” and was met with enthusiastic banging on the walls by the crowd.  After singing the first words to “Bad From Mi Born” at 4.35am Munga was done singing for the night and fans seized the opportunity to take pictures of and with the artist. The party went well into the morning and it was a memorable night.

Pros: lots of good dancehall music, centrally located venue, the lack of a stage meant that fans could simply walk up to Munga; which made his presence more intimate

Cons: too many men in the venue created a slightly hostile atmosphere, the long wait for a short performance 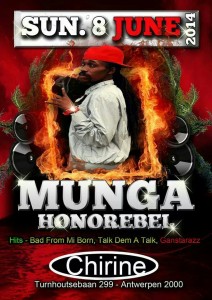